What can you say when you've got a combination like Kevin Hart and Tiffany Haddish in one movie at the same time!! and Directed by Malcolm D. Lee!

Big shout out to Kevin Hart for the Pre Pre Screening in Dallas Texas on 9/11. And huge Kudos to Kevin for making an appearance at the screening and sharing with the audience what this film meant to him on an educational level as well as marking ANOTHER first for this Comedian/Actor. That's right Night School is the first film produced under his own Production company Hartbeat Productions!!

Cool thing they did was post up about 8 huge, bigger than life posters, around Dallas and if you found them, you got VIP seating for the show. Now how cool is that. So if you saw those bbig yellow posters this prescreening was it..

On top of that Kevin made appearances all around Dallas, Tx including some of the local high schools. What a real treat for the Kiddos!

So now on the movie.

Now we have all seen comedies and liked them.. Right Right..... Well this one here hit it on so many cylinders. It was super funny, but tack on all the LIFE elements and situations and personalities and stereotypes.. (wipes brow) I tell you they killed it.

Many people like to go to a film and not get hit with cultural and social awareness messages. But this hits EVERYONES home in some fashion. Every character played a role we can relate to or we know someone who can.

From the loud mouth bad kid in school, to the super smart sibling, to the unforgiving parents, wanna be drop outs, immigrants and young parents, snippy take no stuff teachers and EGO driven, half witted adults... (Wow!! that's a lot) You get a story that while some scenes were silly ridiculous, it was not so farfetched.

This comedy was well thought out, funny and an eye opener about how we view people, how we treat people, honesty, trust, values etc.... 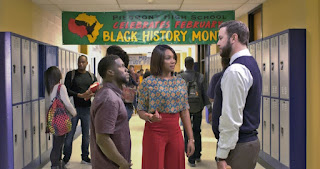 I think it is a win win and a good one to see if you have that teen or are that adult who may be thinking about taking the easy road.

Don't Quit and Don't Doubt yourself!!!

Get your ticket and support!!