Alright ya'll so I grew up on Godzilla,which was first aired in 1954, but it has been in my house since I was young and I admit it has been a minute since I partook in a Godzilla movie. 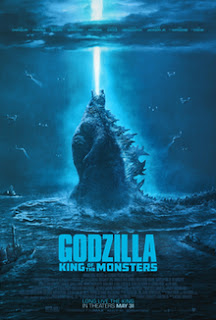 I don't know where to start.

To say in the least. 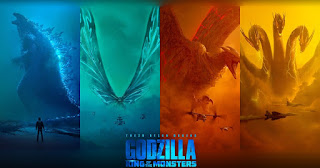 This story was about Godzilla reclaiming his KINGship over the other beasts.  There was a spider, the 3 headed dragon , the eagle, the moth etc....

I lost count.  Godzilla is the expected hero.  He is to be the humans savior.  Ultimately he has to fight the 3 headed dragon creature King Ghidorah or possibly watch all of humanity become extinct.

The human story was less than exciting and was barely tolerable in terms of the acting. 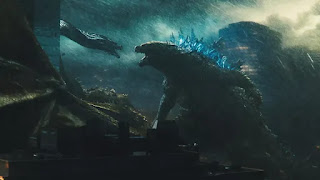 But the humans are of course the orchestrates of this mayhem. They thought they could control the rising of each creature and bring balance.

Well, I don't know if they were successful.

You see the family breakdown and unity, the tragedy that causes the separation and who wants to be the savior, make up for all the wrongs...

If you love Godzilla, the beast fights, I dont think you will be disappointed not one bit.

For me, I actually like to be able to see what I am looking at and if it's CG I want to see the definition and clarity.   I want to see who or what is fighting or throwing out fire or electric beams.

It was a lot of nothing it seemed like to me.  They could have left out a lot of the family dynamics, but I get it.  Brighten up the film and let me see who is fighting.  I kind of like a little bit more than a lot of rubble crumbling to the ground.

Anyway, a little over 120mins, I say check it out if you are already a fan.  If not, you might be good waiting for the dvd. Just saying...